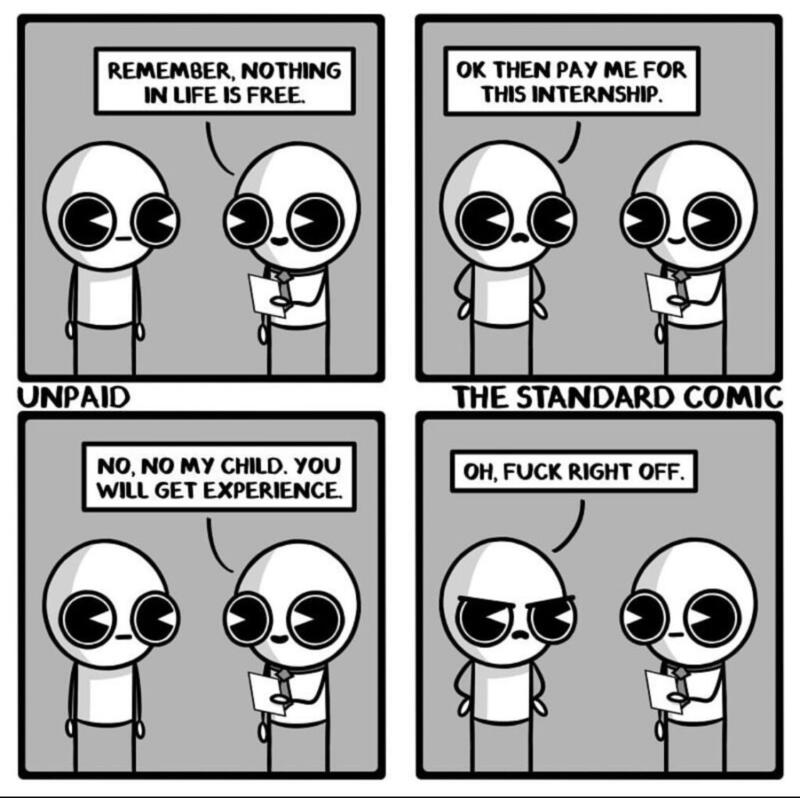 I’m not sure if this is something that all freelancers do, or if it’s just a ‘me’ thing, but even when I have enough work to keep me busy, I still keep one eye on the job market. I have emails set up to alert me to remote positions in blogging, copywriting and social media and I still get them even in my busier periods.

Because of this, I tend to have a fairly good idea of what’s going on and a trend I’ve noticed more and more is the practice of businesses advertising for interns.

Traditionally, internships were a period of work experience, offered by an organisation, lasting for a fixed period of time anywhere between a week and 12 months and were often done alongside education or during a study break. There’s no doubt that this kind of experience can be invaluable in certain areas of employment, and legally there’s a rate of pay for interns that should be paid, however there are a whole bunch of loopholes that mean that companies often don’t have to pay a penny.

The thing that I find shocking is the amount of work that many companies expect from their interns, with seemingly nothing but “experience” to be earned. Many involve travel to firms in big cities such as London or Manchester, which is never cheap and many also require ridiculous levels of education to even qualify.

I’m struggling to understand what sort of graduate can afford to travel to a job, work for free and also then, in the process, make themselves ineligible for any sort of state benefit potentially for 12 months?

I read yesterday that the rate of young people living at home with their parents is the highest it’s ever been, and is it any wonder when people are graduating from university and the best they can hope for is a year of working for free?

With the Government planning to lower the earnings threshold at which student loans need to start being repaid, is higher education even worth the minimum £27,750 that graduates will have been charged for their learning? That’s as long as you don’t need a Masters or other higher learning for your chosen career, or your degree is a 4 year course, where you’ll end up paying closer to £40k.

Is experience really that valuable?

After a brief look on Reddit’s Choosing Beggars page, I found some absolute gems of adverts for unpaid internships. Here are a few of the most rage-inducing:

What do you think? Are internships worth the overworked/underpaid stress? Did you do an internship which significantly benefitted your career? Or would you advise anyone against taking on an intern role? I’d love to hear your opinions.